As my home gets increasingly flooded with baby items....swings....play gyms....high chair....exer-saucer....tubs....bumbo seats....bottles....toys.....burp rags.....I am learning to embrace it as sort of "baby chic" decor.  Only a specific population can pull it off.  Its all the rage, and well, comes with being a parent (or grandma!).

I really love to decorate rooms, so I was a little stubborn when Everett's stuff started crampin' my style.  Trying to store it away.  Hide them behind, under, in things. Fold them up and put them away.  It was bad....like OCD - anal retentive bad.  But really, I'm like that all the time--- with everything, so its really not a huge shocker that I'd be this way with all of Everett's things.  I've been accused of taking dishes away before people were done with them, vacuuming up crumbs as people are eating, washing the sink as my husband brushes his teeth, tucking in the love seat cover every five...no...two minutes, dusting the TV while people are watching it, cleaning up food messes before the food preparing is over, and about a dozen other obnoxious tendencies.  I've got issues....my poor husband!

So, it was really no surprise when I wanted to 'de-clutter' (don't even get me going on the de-clutter thing---I am a self proclaimed minimalist!) the rooms and keep them as they were before all the baby stuff.  I mean....are baby swings and  burp rags and bottles strewn about really that aesthetically pleasing?  My initial opinion on this matter was "Helllls No!"  And it is not like my decorating and decor is all that awesome.  I just like to decorate. Its like....blank canvas, meet creative soul.  I like to switch things up all the time and change the look of rooms and add cool vintage finds and just have fun with it.  Its like an art project to me!  You see these rooms every day...why not make 'em cool to look at?

After awhile it became hard to rebel against the new decor.  First of all, some of it is heavy and moving it all the time sucks.  But also, once I began to see how much Everett really enjoyed all of these things and witnessed smiles and giggles and new milestones with them it was harder to look at them as junk, but rather pieces of memories.  Like the time we put him in his swing and he wiggled around so much that he was practically swinging with half his body hanging out of it.   Or the time he first learned to press buttons for noise on his play gym and the look on his face when it happened.   Or how a recently acquired high chair makes me stunned at the realization that I have a big boy that has grown so so SO fast!  Looking at these objects now just makes me proud to be a mom and happy to have been making memories along the way....even if they are crampin' my style.  Its like a dead giveaway that we have a child whenever anyone comes to our home and sees all of this stuff  (not that we have many people over that don't know that we have a kid--but hey--the pizza man has been known to frequent our residence quite often).  And I like that....I don't even have to say, "Hey, I'm a mommy!"  They'll just know, and well, I think that's cool.

So, here's to 'baby chic' decor.  May it increase over the years and forever cramp your style! 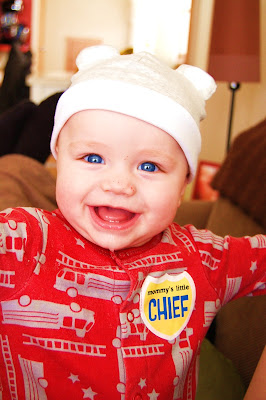