And then I became a soccer mom 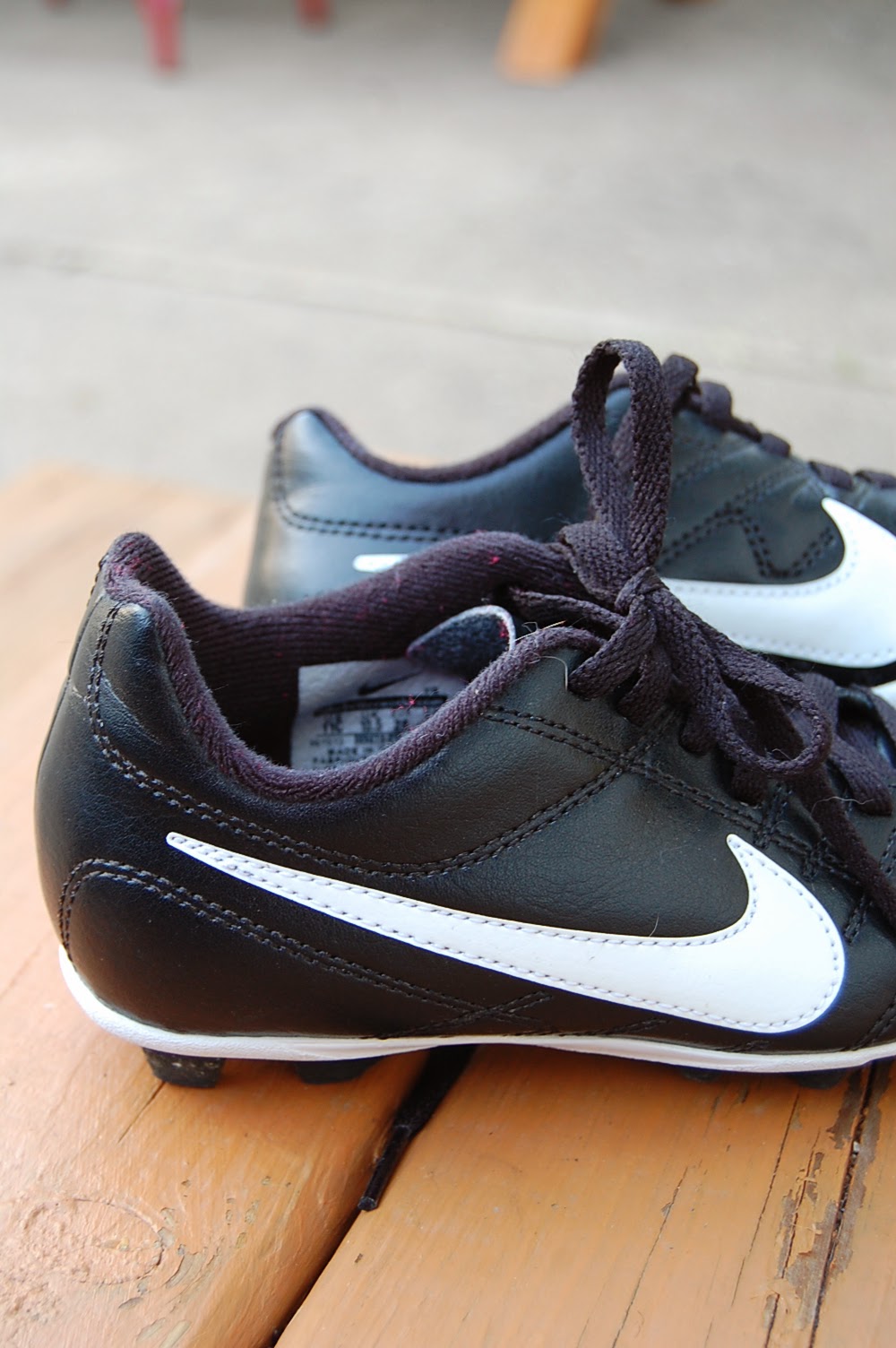 Get me a minivan and bumper sticker--I am--a soccer mom.  It's official.

We got the random and last minute opportunity this afternoon to get Everett in a "mini kickers" community league.  I've been really wanting to get him in some kind of organized activity for awhile, so we picked up shin guards, socks and teeny tiny cleats and had ourselves a soccer star. 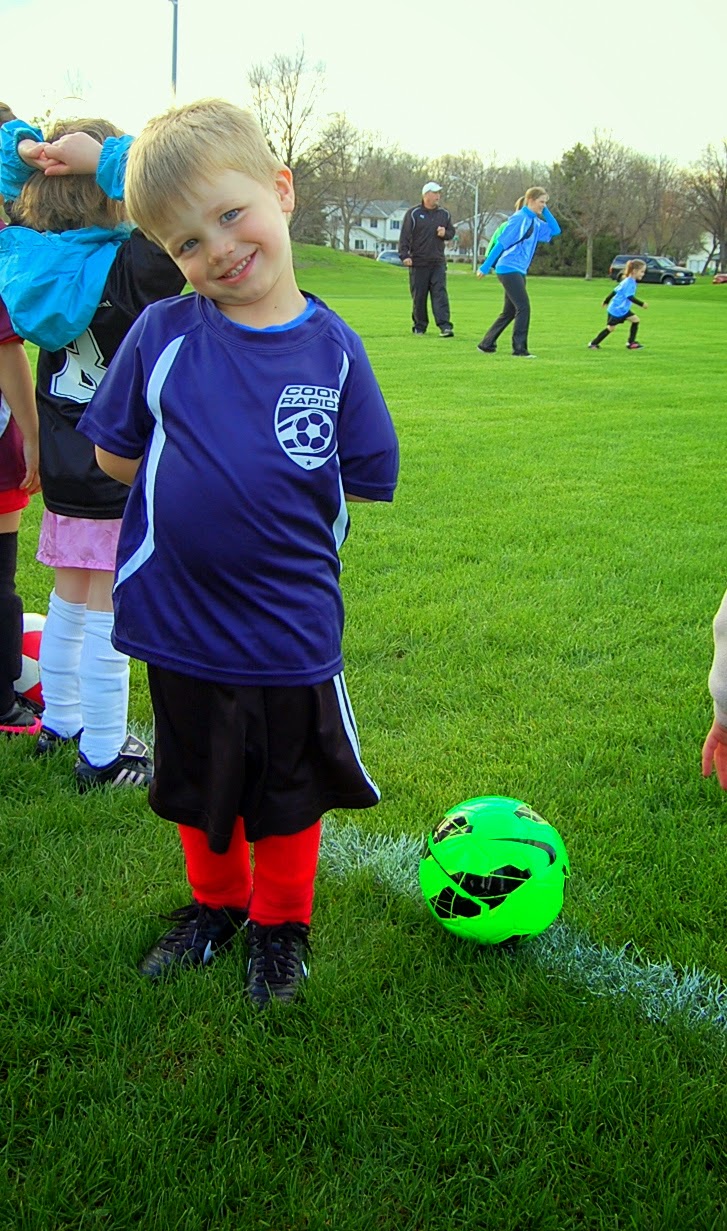 Ok, can I just say, little 3/4/5 year olds "playing" soccer is one of the most chaotic hilarious things.  You've got the kids that get it, the kids that clearly do not, and those in-betweeners that switch between getting it and totally freaking out.

Everett was an in-betweener. 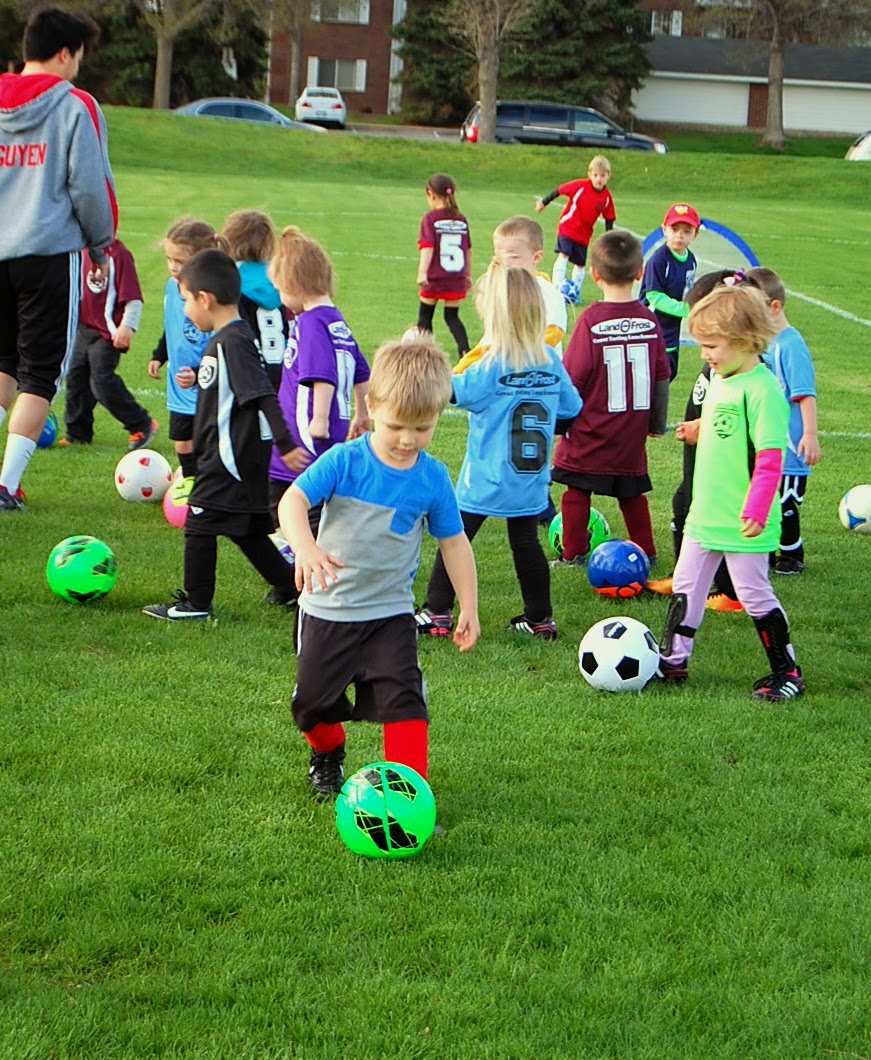 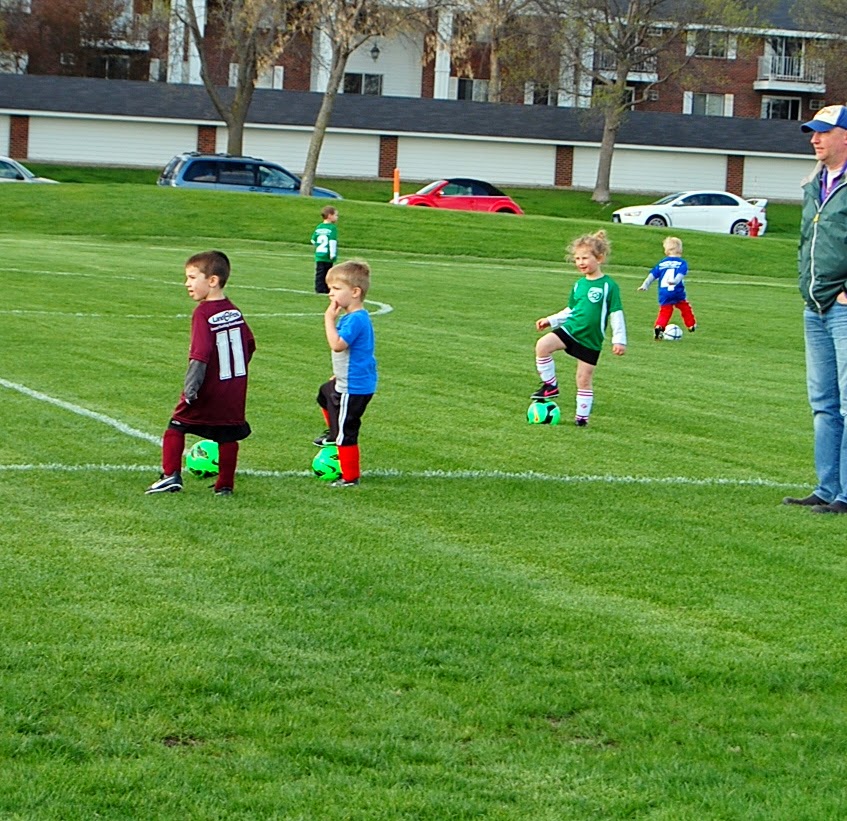 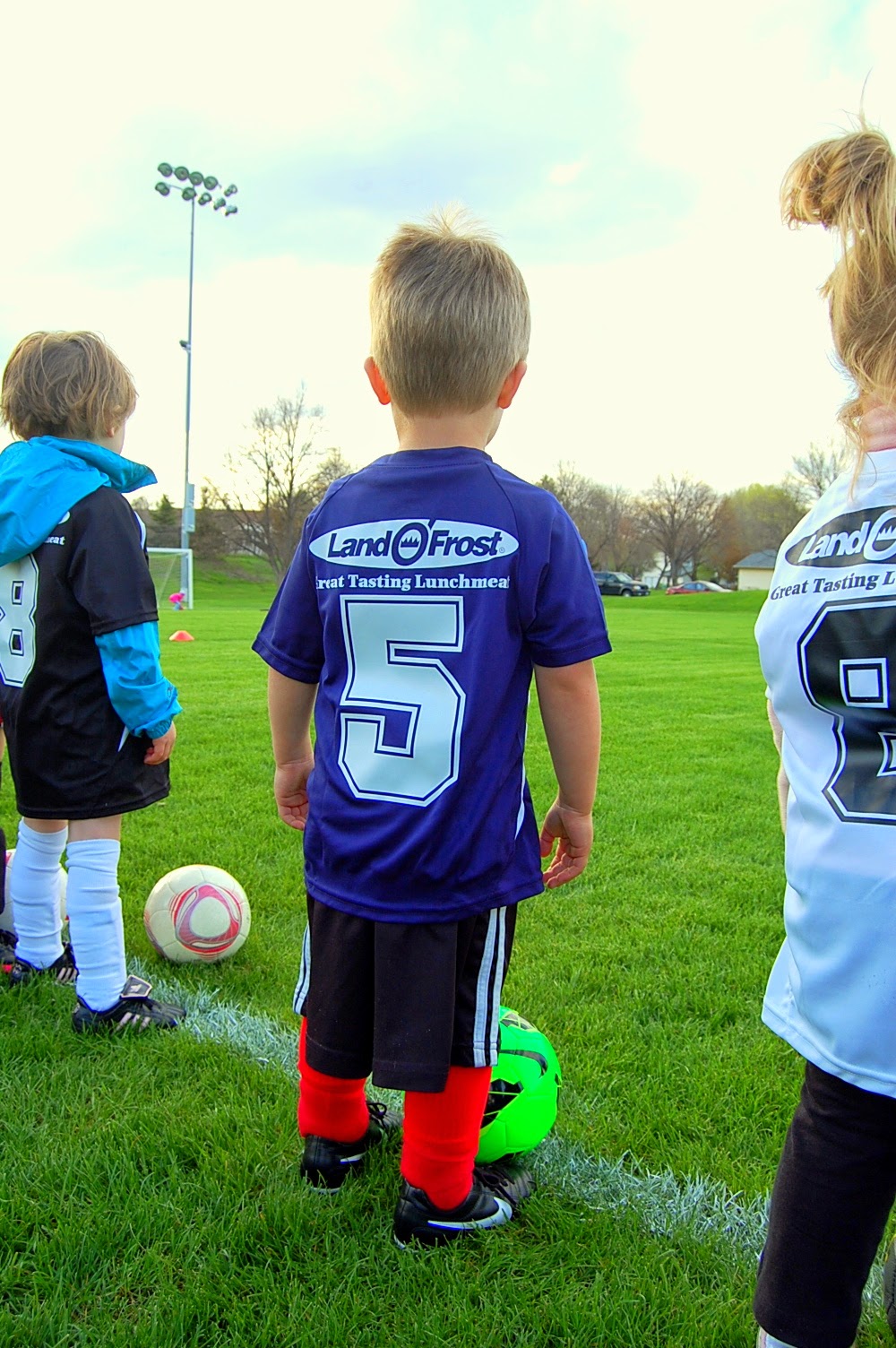 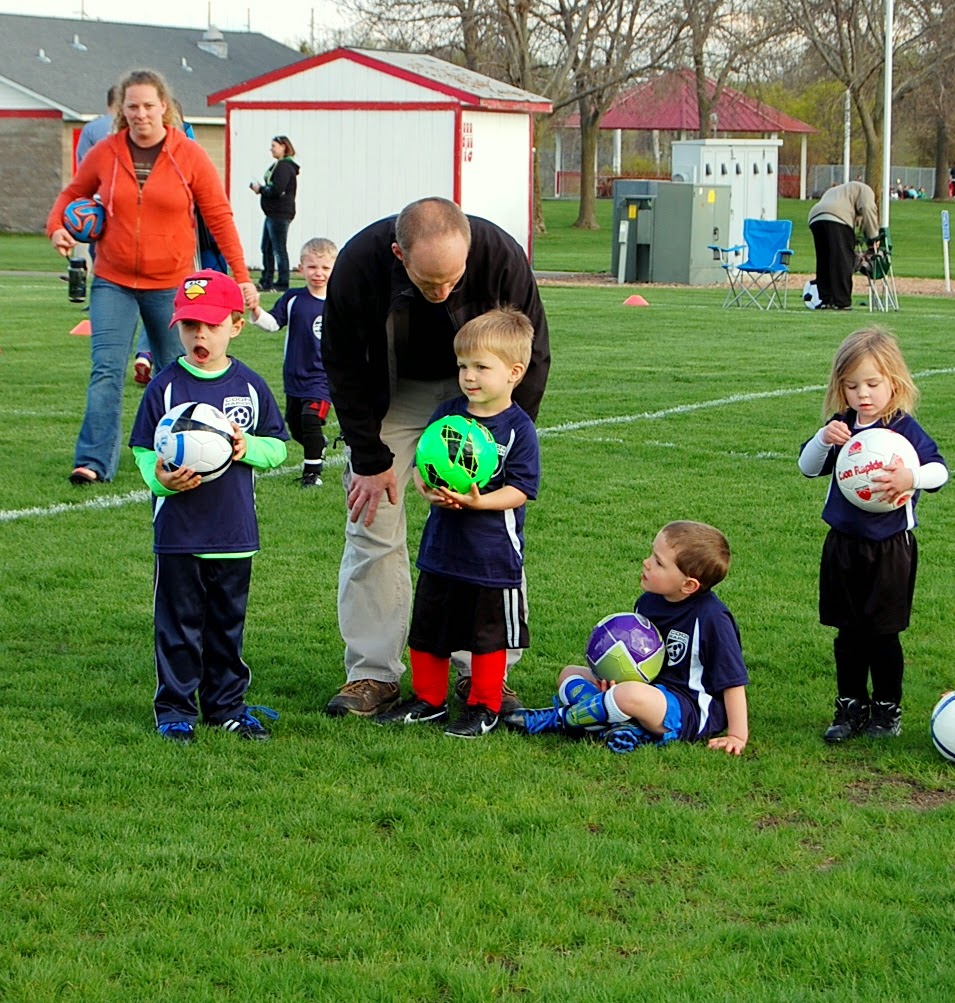 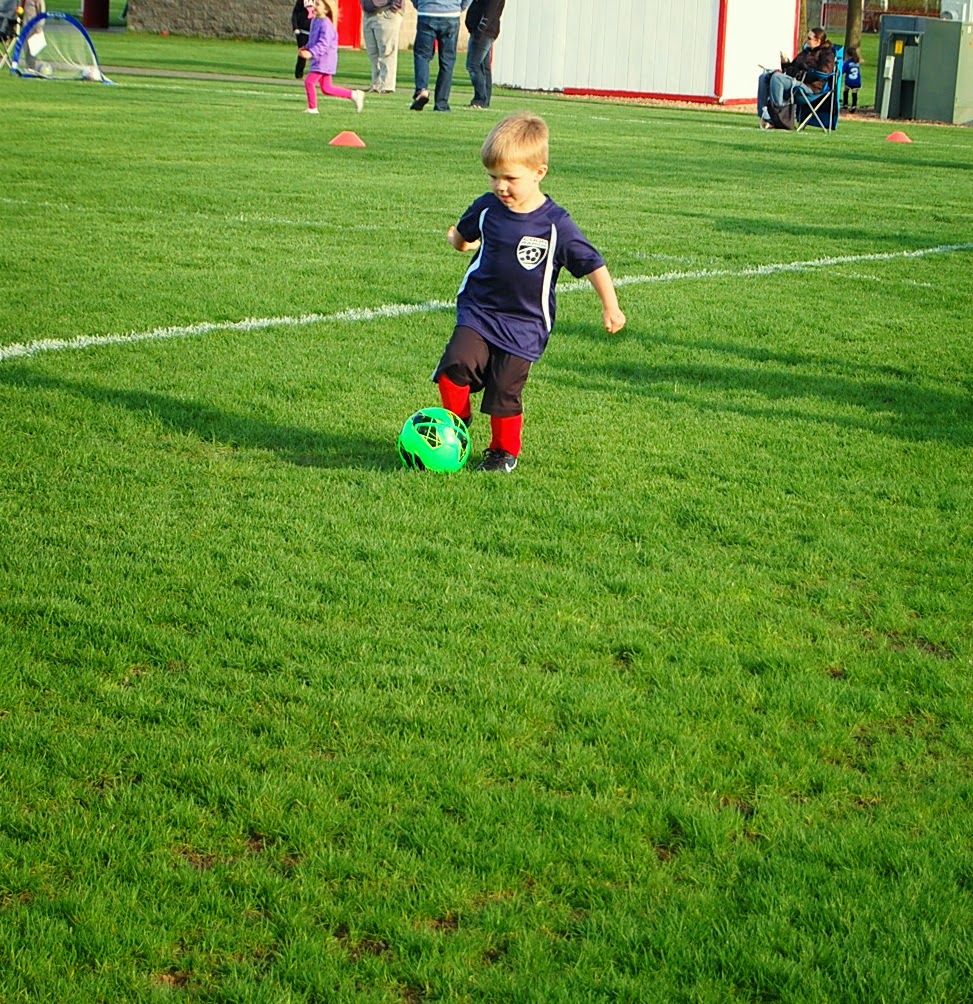 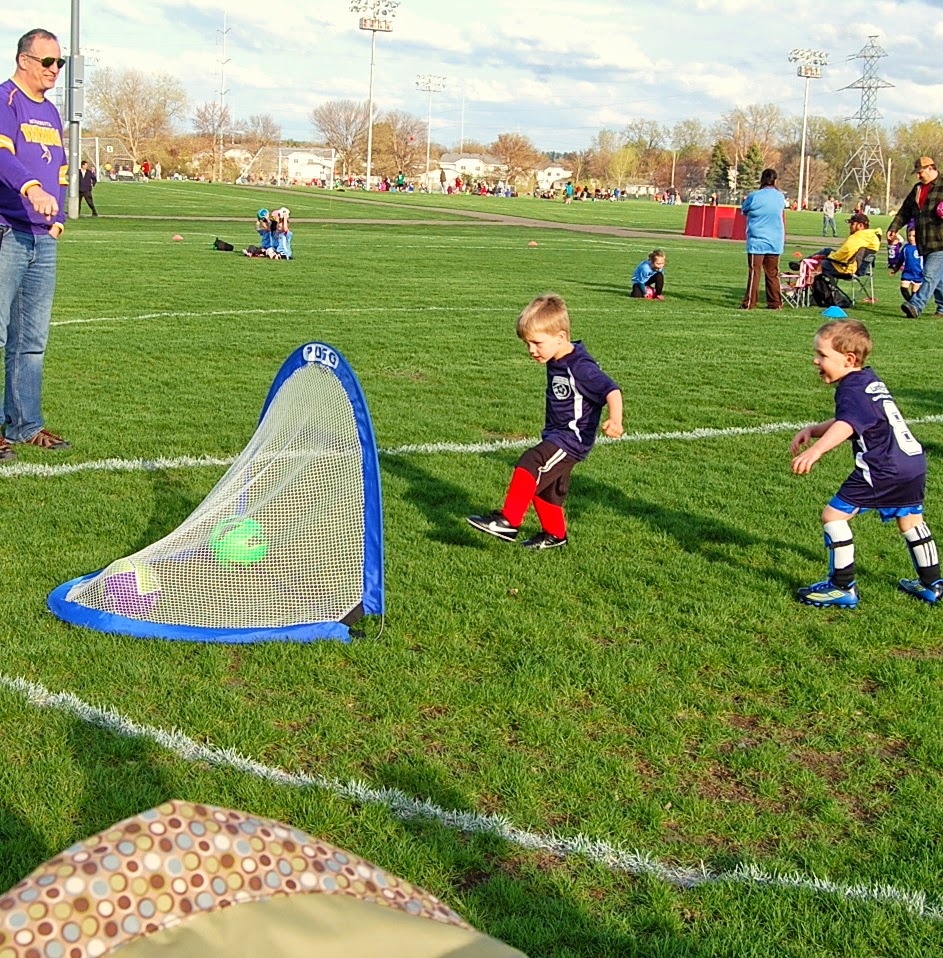 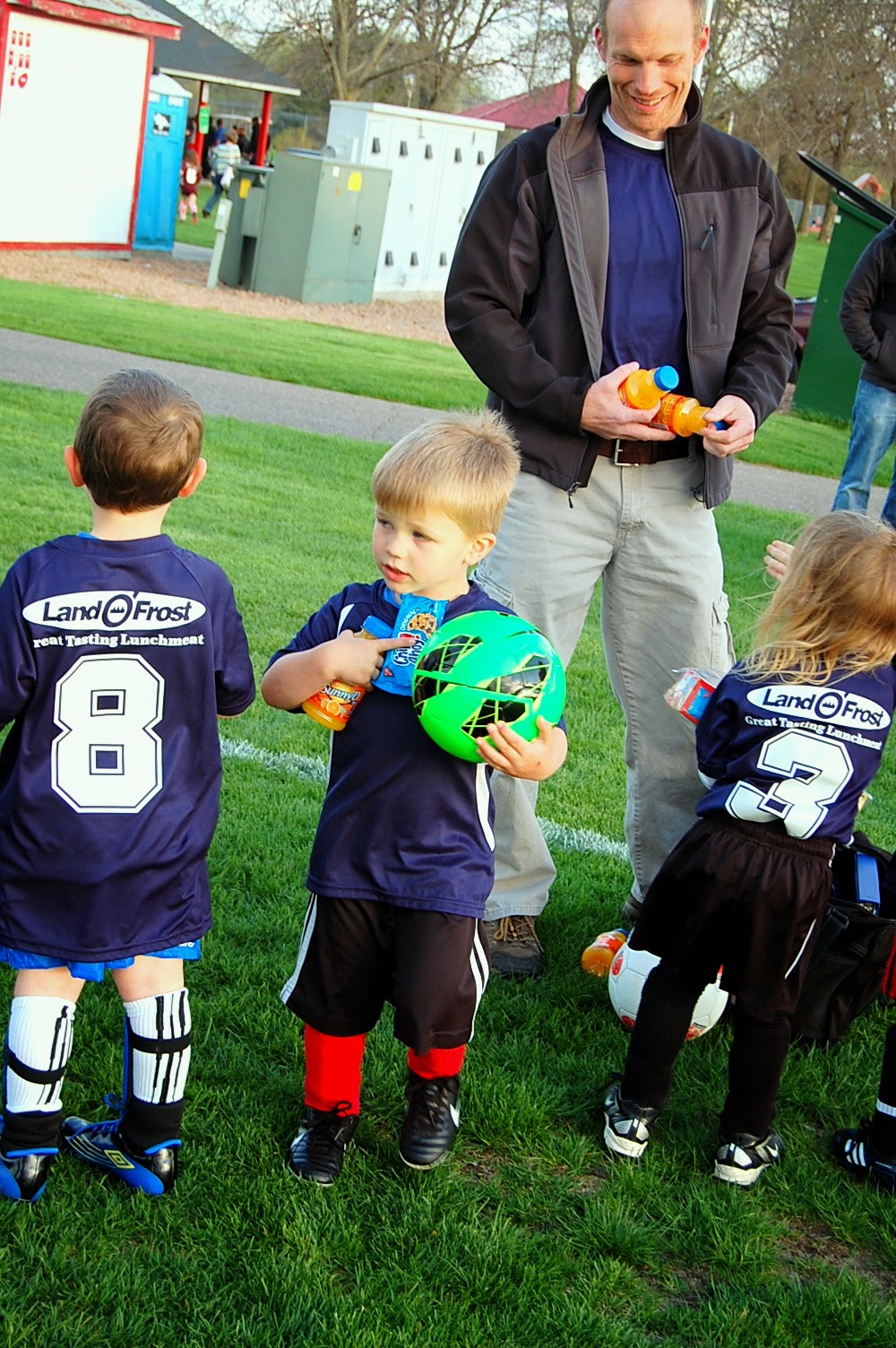 He did great at first, then he had some meltdowns when he realized he couldn't kick the ball all by himself and that other kids could get it too.  So we have a lot of learning and practice ahead of us.  He IS the youngest on his team though--so considering that fact, I'm not worried.  Heck, I'm so proud of my little soccer star! It was the highlight of my week by far.

I'll be his soccer mama any day!

You're not the only one. 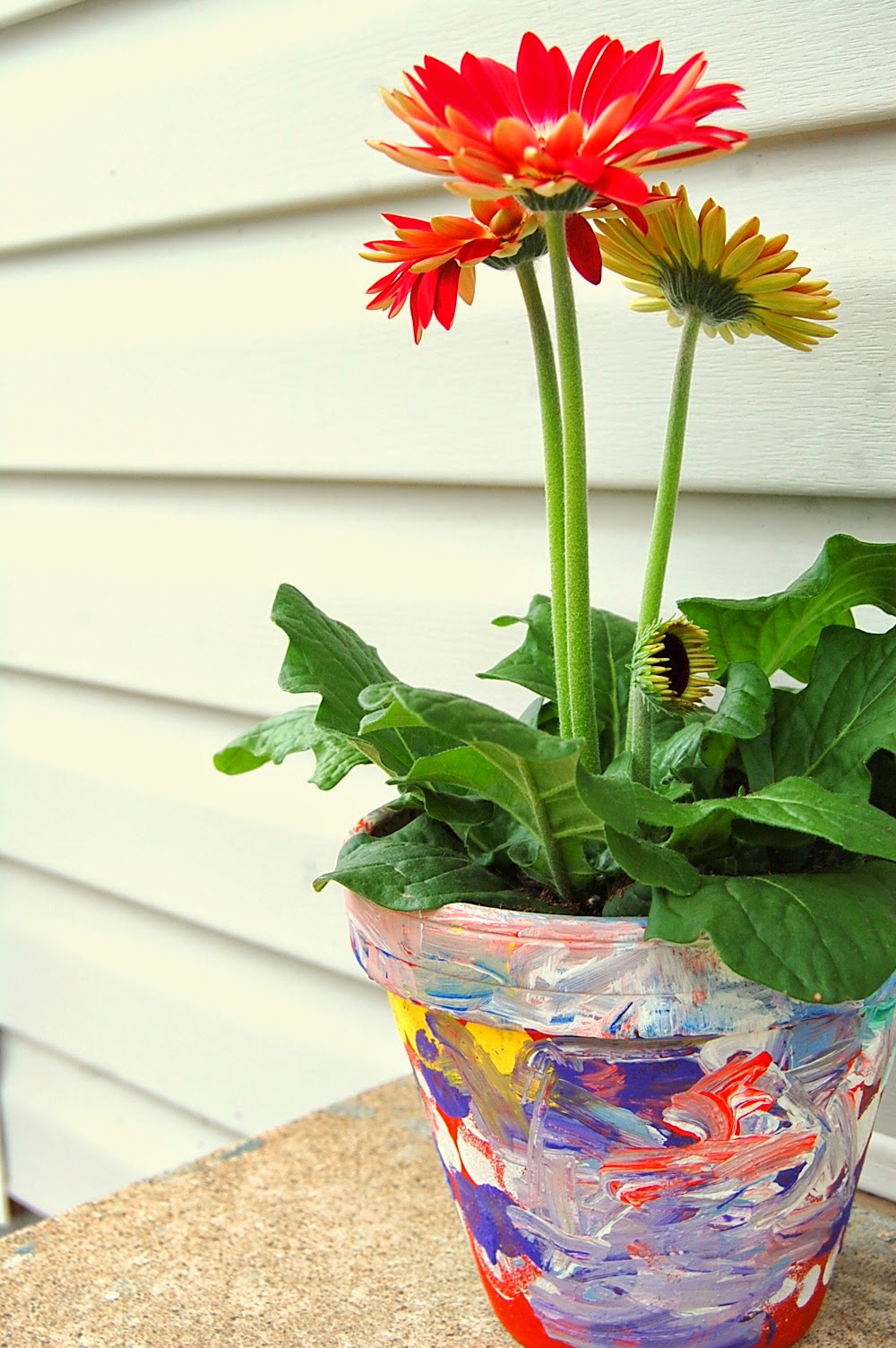 I figured, what better day than Mother's Day to shed some light on the reality--at least my reality of motherhood.

I think a big chunk of learning to be a confident mama is to be able to be transparent enough to say, "Hey you mother of 4 with baby food on your shirt and mismatched earrings, I see your chaos and I raise you an 'I lost my kids' favorite toy and I'm not sure when the last time is I bathed my toddler'".

Isn't that realization and connection so much better than isolating ourselves and comparing who we are to Pinterest, Bloggers, TV, movies and magazines (totally guilty of that!).  I'll bet you my formula stained sweater that there are imperfections, flaws and mistakes in every nook and cranny of those people we idolize and put ourselves up against.

I constantly have to remind myself that "comparison is the thief of joy".  It's true.  If I'm not happy, I check and ask myself, "self, why are you not happy" and the root of the unhappiness I feel is because Satan has taken the foothold I gave to him called comparison.  It's a yucky thing.

So on this day, Mother's day, I'd like to give the maybe handful of readers I have some of my realities--not really even imperfections, but the reality of who I am-who we are as a family.  Realities that are purposely hidden away.  Ones that I feel like "I must be the only one in the world that ____".  Ones that I'm sure many of you share with me.

I must remind myself that I am never "the only one".  You are never the only one.  We're in this crazy thing of parenthood together and it's messy. Downright ugly at times.  But such is life.  We were created by a merciful, forgiving and loving God that made us to relate to each other and share in these things--good and bad.  Such a transparency has got to be more helpful to building fellowship and community than hiding these bits of who we are, right?

-Marriage is hard. Honestly, the hardest thing ever--to be with someone nearly 24/7 and constantly work to make unified decisions and actually like each other all the time.  Ooftah--yeah that's Minnesotan for "what did I get myself into?!"  Truth be told, yes, I have thrown around the "D" word before and we thought we were headed there for awhile.  Thankfully God intervened.  Marriage is hard.  You're not the only one.

-Sometimes I really do lose track of when I last bathed the kids.  Honestly, I only bathe them maybe twice a week unless they are smelly or visibly dirty. You're not the only one.

-I have left the same gosh darn glass in the dishwasher for the last 2 months because it is just not getting cleaned for some reason and I refuse to hand wash it! You're not the only one.

-I ran out of deodorant last week and I've been using my husbands. You're not the only one.

-I'm pretty sure we have a couple containers of moldy food in the back of the fridge, but I have--and will probably still neglect to get them out.  You're not the only one.

-I always forget to take the lint out of the dryer.  Thankfully Curt does it.  If for some reason our house burns down in the future-it's probably my fault.  You're not the only one.

-I am a really good cook. About 4 times a year.  I actually really stink at it and have no motivation to cook whatsoever.  You're not the only one.

-I stink and reading my Bible.  I never make enough time and when I do, I struggle to really dig into it.  I actually stink at reading period.  I have three books I've started and have no idea when I'll get to finish them.  You're not the only one.

-For every cute picture you see, there are probably about 15 that sucked before I got that perfect shot.  You're not the only one.

-I'm kind of afraid of large groups of people.  You're not the only one.

-I've lost about 20 lbs since January which is awesome.  But I still have that darned saggy belly pooch.  I have stretch marks where I didn't think I stretched and I still can't fit into my wedding dress. You're not the only one.

-During the first few years of our marriage and even occasionally now in our 7th year, we didn't manage our finances well and made/make mistakes.  We've been "in the red" more times than I'd like to admit and completely understand what it feels like to live paycheck to paycheck.  You're not the only one.

So, mama's, women, human beings on the other side of this post--surely you can see that you're not the only one with some dirt hanging around your life. And believe me, there is much much more where this comes from!

So put it out there--share it with someone and allow them--or yourself that, "I thought I was the only one?!" moment.  Just as our great, beautiful and fun things can bring us together--so can these little realities--In probably a more profound and sort of 'this is what life's about' kind of way.


So happy Mother's day.  You're doing great. You really are.  It's ok to not be perfect--you're not the only one. 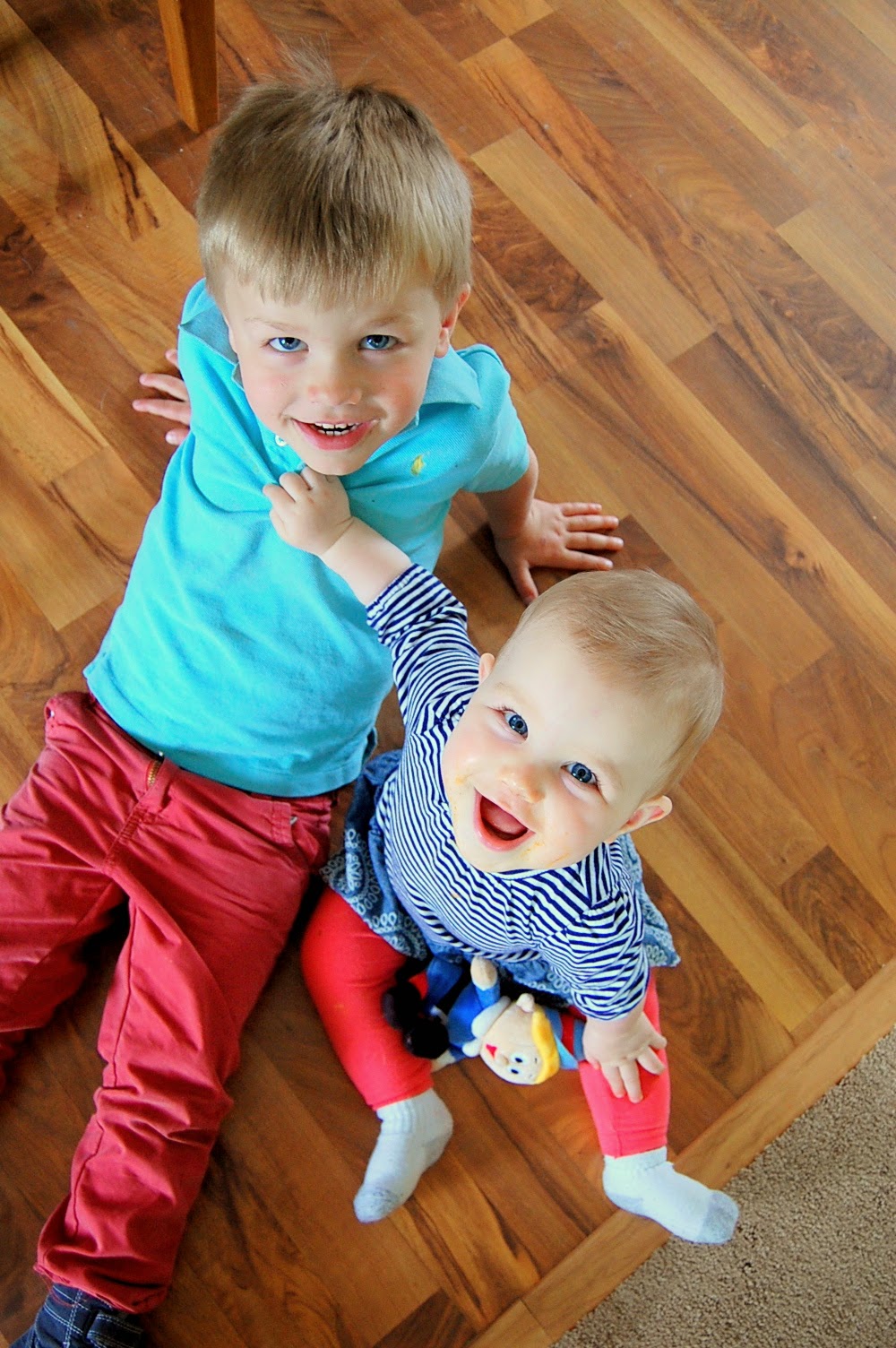