Growing pains---what a great show.  Cue theme song.  However, though this classic family drama is worth a post of its own, I'm talking about a different kind of growing pains. Some I was not too familiar with before.  I mean sure, I like everyone has experienced these tell tale developmental pains, but still--the pains I refer to in this post only come in motherhood and after almost 8 months, my growing pains are increasing exponentially.

Big boy is outgrowing his swaddle sac--and though it may not seem like a big deal, it just further solidifies that my baby is growing way too fast and now transitioning into swaddle-less sleeping has me in pain with this rapid growth.  Where has my BABY gone?  The little nugget that just slept in my arms all the time and loved to nestle into his little burrito like swaddle.  Pretty soon I am going to have to lower his crib mattress and I'm just not sure I'm ready for that!  I welcome the new milestones and growth, but boy does it seem to be coming so fast--its giving me growing pains!

Baby can feed himself

We have recently started giving Everett a bottle with handles occasionally to help with our multi-tasking and also his own fine motor development.  Where at first the bottle would fall and he'd have a hard time holding it, he now can do it all himself.  The fact that he can do it himself and has the ability is exciting, but it's also sad.  Oh so sad.  See, in my mind, we as parents have been necessary for him to take his bottle, and even earlier on, I as mama was the sole provider of any and all of his nutritional needs. Just me.  Now, its moved from breast milk, to bottle, to formula bottles fed by mom and dad, to formula bottles that he can feed to himself.  So really---it's like he doesn't need me...us....like he used to.  He is getting more and more the point of being able to do this independently.  And it is just starting! Imagine what it'll feel like 6 months from now! Oh the growing pains.

While I know that this hurts my little man more than me, its still something for me to get used to.  Teeth.  Adults have teeth, babies don't have teeth.  He's getting them on bottom and top and it makes him look so different.  His smile changes. I do have to admit though, little ones just getting their teeth are dang cute!  I am sad for him though--it seems pretty painful for him.  I just wish I could do something to soothe his aches.  Sigh...just another growing pain for mama.

There is just something about Everett eating baby food that makes him seem so...old!  The way he sits so eager in his high chair with his mouth open ready for each bite. Its like, umm...how did you get to this point so fast?  You're already 8 months old?....but your only 8 months old.  Motherhood is having a hard time catching up to this little eater.

This kid does not stay still.  He does not crawl yet...or walk obviously.  But in one minutes time he can get from one side of the room to the other.  Its an unusual army crawl/roll/scoot.  Makes me real nervous for a few months from now.  I can only imagine all this boy is going to get into.  My growing pain in this is that he is so mobile that he doesn't need me as much.  I remember when he was just a peanut and I could just leave him on the changing table, bed, couch or floor and he'd stay there---He would rely on me to get him anything and everything.  He knew nothing else.  Of course to an extent he is still very needy and dependent on us--its our job and I like it that way. But, now he is a little explorer and I can hardly contain him in one spot.  He doesn't need me to get the toy a few feet away or to entertain him at any given second because he is finding new ways to do so.

I know that these growing pains are to be expected, I mean...really...I'm not dumb, promise. I had an idea of what to expect. However, I never knew that I--while Everett grows-- would have such growing pains myself.  He's my first.  My baby.  He was sooo little and now getting so big. Some days it just hits me more than others and well, you get to read about it :)

While his growing may be painful to me at times, the milestones are being met and little successes are happening and to that--we celebrate and look forward-- in a bitter sweet way-- to each new growing pain we may experience.  Fact is, baby boy does still need us and shows us in his embrace in the middle of the night or in his smile or even when he is starting to reach out for us. The day all these growing pains bring him to the point of saying 'I love you mama' will make it all worth it!

"How long to you want to be loved?  Is forever enough, 'cause I'm never ever givin' you up" 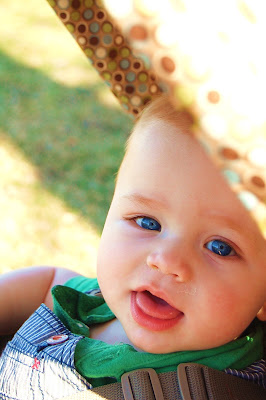 What growing pains have your experienced in the past or recently?
Posted by Unknown at 9:21 PM